Were it not for the loud expletive that came from the pile of rags you just tripped over, it would be hard to believe that any human being could exist in that state, but sure enough, a grime-blackened face emerges from the growing stench of alcohol and body odor.

"Another one of ye, eh?" The man looks aged far beyond his years, and struggles to get to his feet. You extend your hand and with only a moderate amount of grunting and swearing from the vagrant, he finally rises and brushes himself off. "Don't suppose you could spare some change, yeah? Ah, of course you can't. Lemme guess. Five hundred bucks, all you got plus your name right? Life savings, planning to start a new life here? I seen it all before."

He turns around, and you're grateful he does as the hobo begins to relieve himself up against the brick wall. This is nothing like you'd imagined.

"Since you helped me," he says, "the advice is free, not like you'd spare a nickel my way anyway. There's two things that make this here world go round: money and power. Ain't nobody gonna give two shits about you until you got money, so don't worry about the power part yet. But money— that's easy to come by if you know where to look."

The sound of a zipper concludes his morning ritual, and he turns back around. You say a mental prayer when he doesn't extend his hand again to shake.

"See that old lady over there? Just walked out of the bank. Bet she's got a wad of cash in that purse of hers. Looks too feeble to fight back. One grab and you've got it. Speak softly but carry a big stack."

He laughs at his own joke while your insides squirm at the thought of stealing from the elderly. He seems to note your unease. "Aw hell, kid. That feeling you've got right now? That's your conscience. You gotta swallow that urge. You'll be doing much worse from now on."

"Soon enough you'll be robbing liquor stores and knocking over 7-11s. Not to mention running drugs. That's the way to the big bucks. The trick is to buy low and sell high."

"There's a few corrupt cops around too. Grease their palms a bit and they'll give you tips on drugs, crackdowns— and guys like me who've fallen out of favor."

"But them sumbitches'll charge you big. Be careful where you spend that big stack." He snorts, but it degrades into a round of phlegmatic coughing. Thank goodness you passed on lunch.

"But you start snatching a lot of purses and stealing a lot of drugs— the people on top will notice, so you better start looking around for gainful employment. You take too much money from their turf and you might just find yourself as fish food in the middle of the night."

"These guys— they've got the power. They started out just like you did, and rose to the top.  Maybe someday you can too. But until then-" he sneezes, and wipes the dripping mucous onto his tattered sleeve. "Until then, you'll need to talk to one of the guys in power for protection. They'll take you in, and it'll cost you. But at least you won't die out here, a homeless bum like me."

"And one more thing." Reaching into his patched jacket, he pulls out a worn leather book and hands it to you. "Some helpful tips for you, along the way." You take the book and flip through the scrawling on the pages: the memoirs of a man who has seen it all.

You turn to look back at the man, to offer some kind of thank you, but he's transformed into a pile of rags again, dangerously close to where he urinated on the wall. Wisely taking the opportunity to retreat, you stick the book inside your own jacket and walk briskly down the street where another old lady has just left the bank— 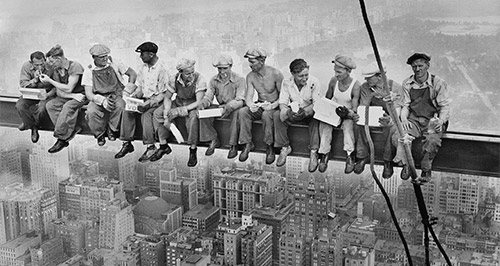